As adults and teachers, we spend a lot of time trying to convince our students why reading is meaningful, exciting, and worth their time. And if we’re not careful, we end up doing more talking than we do listening. Last year, we heard from 14-year-old Jack about why reading is meaningful in his life. Today, 15-year-old Hayley shares her passion for education and open conversation around mental health. An avid reader, Hayley compiled a list of her favorite books to get teen readers thinking and talking about mental health.

As a high school student, mental health is a major topic in my everyday life — both in myself and in others. I read mental health books as a way to feel less alone and better understand those around me. By sharing this list of my favorites, I hope to reach others in need of feeling understood as well as erase the stigma around mental illness.

There are millions of books where the protagonist faces a physical challenge — a car crash, a broken bone, a sickness. But what about the battles they fight between their own two ears that no one else can see?

These books are about the invisible illnesses. The ones people try to solve by saying “get over it” or “just eat”. These stories give an honest representation of the feelings people are afraid to talk about and that’s why we need to talk about them!

My favorite books to start a conversation about mental health:

Kitty was once a careless child. She did gymnastics, excelled at school, and had tons of friends. But then, the “demon” took over and she needed to fight for her life. A true memoir, Brave Girl Eating is a mother’s account of her daughter’s anorexia.

-If My Body Could Speak

A poetry collection discussing everything from eating disorders to sexual assault to trauma, If My Body Could Speak includes it all. Blythe Baird talks about the unrealistic standards of society and learning to love yourself anyway.

Cassie and Lia are best friends, but they bond over who can be the skinniest. And when Cassie dies of bulimia, Lia is left to choose between anorexia or recovery.

Beneath Sam’s seemingly perfect facade, she is battling OCD. But no one can know, until she meets her new friend Caroline who introduces her to the school poetry club and she can finally be herself.

Norah is seventeen years old and confined to the four walls of her house. With both agoraphobia and OCD, she wants to be a “normal” teen. However, that is difficult when she fears both kissing and odd numbers.

-Turtles All the Way Down

On the surface, Turtles All the Way Down follows a group of friends and their quest to find a missing billionaire in hopes of earning a cash reward. But Aza is in a never ending war against her own mind. Her thoughts are ever-tightening spirals of obsessive thoughts she needs to fight to overcome.

-The Impossible Knife of Memory

Hayley Kincain’s dad has returned home from Iraq hoping to give her a normal life. She goes to school like anyone else, but at home, she is the caretaker. Falling apart from his PTSD and addiction, Hayley does her best to help her dad, but she is slowly collapsing under the pressure of responsibility.

Jarrett’s family is falling apart. His mom has been in and out of rehab for as long as he can remember and he doesn’t even know his dad’s name. This leads to him living with his grandparents and being forced to try and live a normal life. A memoir in the style of a graphic novel, Hey Kiddo describes the impact of addiction in a family.

-Last Night I Sang to the Monster

18-year-old Zach should be in highschool. He should be getting an education and preparing for his future, but instead, he is in rehab for alcoholism. He doesn’t remember how he got there and he doesn’t want to remember either.

Caden is an incredibly smart highschooler whose friends are starting to notice his strange behavior. He is also on a ship that is headed for the deepest part of the ocean, but this part of the story is all in his head. His life alternates between the “real world” and the story he writes in his head through his schizophrenia.

-Eliza and Her Monsters

Eliza Mirk has two lives; one online and one at school. In person, she is shy, awkward, and friendless, but behind her computer screen, she runs an anonymous profile where she creates a popular webcomic. But eventually, her two worlds collide.

Audrey can’t leave the house or even take off her dark sunglasses. But then, her brother’s friend Linus comes and they begin exchanging notes. Eventually, leaving the house seems possible again.

Eleanor oliphant has gone through life without really living; her days blend together as she drags herself through them, without stopping to think. Then, she meets Raymond and realizes that maybe there’s more to life than frozen pizza and vodka.

-The Perks of Being a Wallflower

Written in the form of letters, Charlie addresses everything about growing up; from sex and rape to drugs and depression, Charlie talks through it all. We get to see his transformation as he slowly grows up and matures.

-It’s Kind of a Funny Story

Craig is an overachiever; he needs to get into the best school, make perfect grades, and get the most impressive job. But in the process of trying to be “perfect” he stops eating and sleeping, until one day he almost kills himself. This leads to Craig being put into a psychiatric hospital where he learns about himself through talking to the other people there.

Evan Hansen was tasked by his therapist to write letters to himself beginning with the line “today is going to be an amazing day and here’s why.” But when these letters are found by someone at his school, he is drawn into the grief of Connor Murphy’s family, a boy who committed suicide. One lie he tells quickly transforms into an entire story he needs to keep up with.

Shaun David Hutchinson’s memoir, Brave Face, recounts the event leading up to his suicide attempt and how he made peace with himself after. Battling depression and the struggle of being gay in a non accepting community, Shaun discusses how that impacted him growing up, but also how he overcame it.

-We are the Ants

Henry Denton is periodically abducted by aliens and was given an ultimatum: the world will end in 144 days, but he has the power to stop it by simply pressing a button. The problem is he’s not sure he wants to stop it. Maybe the world ending wouldn’t be such a bad thing after all.

Hayley is a rising 10th grader at St. Anne’s-Belfield School. She is an avid reader, member of the Library Club, and an outspoken supporter of mental health education and conversation for teens. 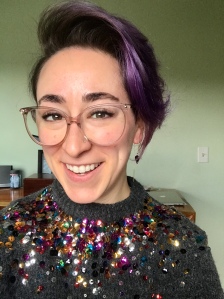